Thoughts from the Archives – In the Letters

The pictures accompanying this article tell of an interesting time in the development of the Home.

In the 1940s we made the move to our 52nd Street campus, built six buildings (five of them residential cottages), and conducted a 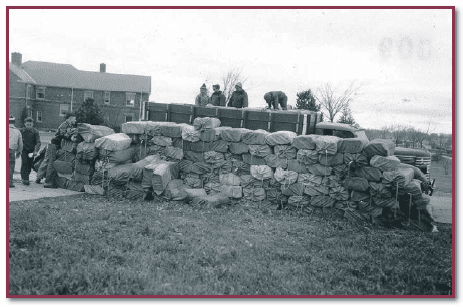 With the increased popularity of direct nationwide fundraising, Executive Director Harry Bruner launched our Home’s first nationwide appeal at Christmastime 1952. He rented names of donors to charities similar to ours from a list broker in New York City and the Home’s nationwide appeals were on their way. The results were heartening. Before long we were mailing millions of appeal letters each Christmas, which gets us to the pictures shown here.

Putting together a mass mailing required sophisticated machinery which was in process of development, or in our case, the willing work of countless youngsters. Well, we had the willing youngsters and the space necessary in the basements of residential cottages and the new Smith Administration Building.

The components of a Christmas mailing – a carrier envelope containing a return envelope, an appeal letter, a sheet of seals (since 1955) and starting in 1977, a prayer card – had to be assembled, sorted, bagged and delivered to the post office. Each boy received a penny for each appeal he assembled.

The mail operation worked well until the year several hundred thousand appeals, sorted and bagged, were discovered in the 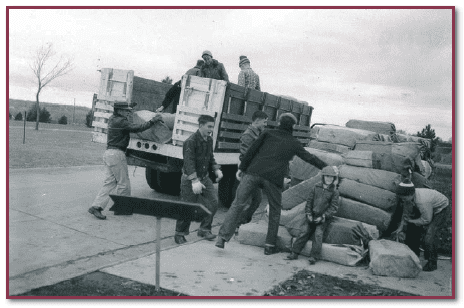 basement of a cottage in April, five months after their intended mailing. Oops! This was surely a test of Harry Bruner’s good nature, a trademark quality of his. This incident contributed to the decision to use a professional mailing house, Acme Mail, on South 16th Street.

The direct mail program of the Omaha Home for Boys has been recognized as one of the top operations in the country.

Not to be overlooked is the annual personal appeal among Masonic Lodges of our county, the Maintenance Campaign. It began in 1926 and the 92nd annual campaign started last month.

Completing our fundraising efforts are planned giving, requests for grants, an annual golf tournament (since 1993), a fundraising gala (since 2015), the OmahaGives! online giving initiative (since 2015), and person-to-person solicitations on a nationwide basis.

As it nears its 100th anniversary, the Omaha Home for Boys can be proud of its century of support for youth and families.

About Omaha Home for Boys

Omaha Home for Boys provides care and support for youth ages 14-24 as part of its mission of Strengthening Youth, Young Adults and Families. The Omaha Home for Boys is committed to providing services to young adults through family-style, community-based programs supported by education.

Our promise began more than 95 years ago – to help youth become successful, productive and independent adults who contribute positively to and responsibly in their community.

As we approach our 100th anniversary in 2020, we will continue to adapt and change to meet the needs of children and families throughout the community.