The dining hall on the Omaha Home for Boys’ campus was bustling with excitement on the afternoon of August 10, 2018, where the high school graduation ceremony for three young men in the Home’s Residential Care Program was about to take place. Cesar, Pierce and Jamal had all met the graduation requirements of the Omaha Home for Boys High School and were ready to receive their diplomas. While each young man made impressive strides in growing academically during their time at the Home, each also saw improved behavior and became role models for their peers.

When Cesar first came to Omaha Home for Boys he was bitter and struggled with substance abuse issues. If you had told him that in just a few short months he would be a high school graduate he would have fallen over in disbelief. Today, not only does Cesar have his high school diploma in hand, he has it a year earlier than expected as just a junior. He earned an astounding 30 credits in just five months at the Omaha Home for Boys High School.

“Cesar made a remarkable transformation from the angry person he was when he joined us to the helpful, friendly, respectful young man he is today,” said Jane Erdenberger, a teacher at the Omaha Home for Boys High School. “His positive attitude toward program, classroom and academic expectations, together with his leadership skills, established him as an important role model for the rest of the students.”

Andy Powell, a Behavioral Specialist at the Omaha Home for Boys High School, describes Cesar has having had one of the most amazing turnarounds he has ever seen. “It took a little time, but Cesar figured out what he wanted, set a goal and didn’t stop working until he had reached that goal,” said Andy. “He has the enviable ability to ignore negative distractions and keep his focus.”

With his high school diploma in hand, Cesar plans to go to trade school to become a welder.

Pierce – Eyes on the Prize 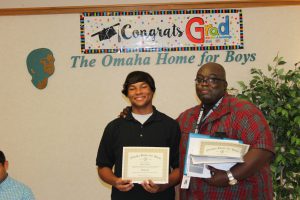 From the first day that Pierce stepped foot in the Omaha Home for Boys High School, it was clear that he was taking his time in the classroom very seriously. The quiet, focused teen earned all five of the credits he needed in just one month with nearly a 90% average grade.

“Pierce came to school ready to ‘get it done.’ He kept his head down and his eyes on his goal from the very first day,” said Jane. “He didn’t let himself get distracted by setbacks.”

Jim Springhower, a teacher at the Omaha Home for Boys High School, adds, “In the short time that Pierce was a student at OHB, he made a very big and positive impression. While working to graduate, he set a very positive example for his peers as to what it takes to be successful.”

On graduation day Pierce addressed the crowd stating, “Omaha Home for Boys helped me to get back on the right track and to graduate a year early.” Pierce plans to keep his success growing and hopes to attend college utilizing one of the Home’s scholarships. 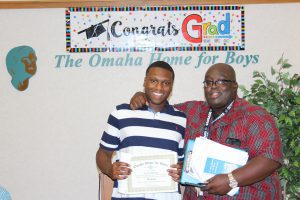 When Jamal came to the Omaha Home for Boys High School, his GPA was barely registering on the charts at a dismal 0.9. Three months of hard work, dedication and the steadfast leadership of caring teachers and house parents helped Jamal increase his GPA to 2.4. During this time his average grade was a solid 86% and he earned 16 credits.

“Jamal’s self-confidence is obvious as he made friends and committed to finishing his school work without letting other behaviors distract him,” said Jane. “He had a positive impact on everyone around him.”

The Omaha Home for Boys High School had a record-setting school year with students earning an unprecedented number of school credits. In all, just over 500 credits were earned during the 2017/2018 school year. Additionally, noncompliant behaviors dramatically decreased compared to the previous school year, students had nearly perfect attendance, and the average grade earned was an 82.7% with more than 200 of the grades being 85% or higher.

The Omaha Home for Boys High School is committed to helping every student reach his full academic potential. Located on our main campus at 52nd and Ames Streets, the school serves all of our residential care youth. The school focuses on credit recovery and accrual with the goal of helping youth meet grade level expectations by completion of the program. The school also assists with college preparatory classes and financial aid assistance and offers scholarships to eligible students.

How You Can Help

Are you inspired by the amazing work being done at the Omaha Home for Boys High School to help youth reach their full potential? YOU have the power to help students achieve academic success by making a tax-deductible gift to Omaha Home for Boys today!